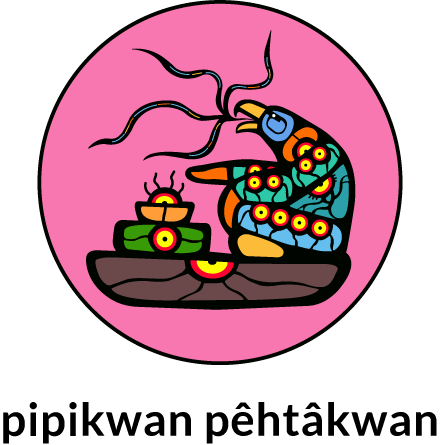 pipikwan pêhtâkwan is an Indigenous owned, led and majority staffed public relations agency focused on elevating Indigenous voices, projects and issues. We primarily serve Indigenous businesses, organizations and communities to bring their voices to the mainstream media and general public, while ensuring Indigenous Peoples maintain ownership of their initiatives and stories. The pipikwan pêhtâkwan team prides themselves as helpers who understand the barriers and know the language that resonates with our peoples. We collaborate with our partners to build communications and engagement strategies that work for Indigenous communities.

pipikwan pêhtâkwan is an Indigenous owned and operated company focused on elevating Indigenous voices and their stories. We are committed to meaningful, transparent engagement, ongoing dialogue and communication with our clients, communities and stakeholders. pipikwan pêhtâkwan believes in empowering Indigenous Peoples to share their projects, issues and initiatives with mainstream media and the general public. pipikwan pêhtâkwan has created an impactful team who brings a much leaded lens to public relations. Majority of our team identifies as Indigenous or as a person of colour.

Reporting to the Director of Engagement, the Engagement Advisor would support and strengthen engagement between pipikwan pêhtâkwan’s clients and Indigenous communities, groups and people. The Advisor will support respectful and effective community relations while collaborating with our clients. They will create contacts and connections through engagement activities and be responsible for helping develop an Engagement department for pipikwan pêhtâkwan.

The position will be working remotely or the candidate can use our shared co-working spaces in Edmonton and Calgary locations with regular supervision and development. This includes regular video-conference meetings, ongoing virtual team messaging/chat tools, emails and telephone calls.

Deadline for applications is
May 6, 2022

This website uses cookies to improve your experience. If you continue to use this site, you agree with it.